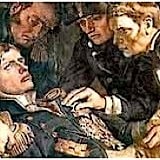 “HARDY,” SAID ADMIRAL HORATIO NELSON as he lay dying in the gloom of the Victory’s lowest deck, his face lit only by the faint glow of horn lanterns.

“This damned musket ball has fair done for me and – oh.”

William Beatty, the surgeon eased the admiral into a more comfortable position as Captain Thomas Masterton Hardy knelt down beside Nelson.

“But Hardy,” gasped Nelson as the blood began to bubble up and flow from his pierced lung, “now that I am breathing my last, I feel I must reveal to you that I have a rather – choke – strange confession to make.”

“I have always admired you and your bravery, your fortitude as a long serving fleet officer,” said Nelson. He shifted sideways a little and groaned faintly.

“I – I am – uh – a somewhat multifaceted individual and – I – er – strangely – I began to feel – from the very first – cough – time I saw you in your splendid naval uniform. Oh, what a dashing figure you cut. Never had I seen such a handsome young man. Despite the fact that I am happy with my mistress the Lady Hamilton, I have been drawn towards you. Oh how I – ”

Nelson’s voice, which had grown weaker, trailed off at this point.

Nelson groaned again and shifted once more, ever so slightly. Fresh wet blood stained the white buttons and lapels of his undercoat bright red.

He turned his head sideways; his right ear close to Nelson’s lips as the dying man’s words, now more faint than ever, came in a hushed whisper.