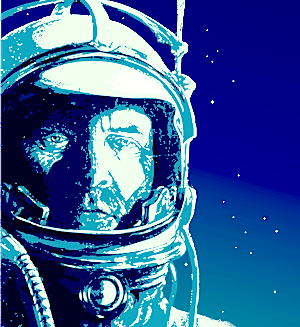 They are liable to be far stranger and more startlingly alien than anything you can possibly imagine, either that, or so boringly basic and dull as to be an utter disappointment! But one thing is absolutely certain; it’s gonna be a long time yet, before we can get the kind of technology together to go and seek them out among the stars.

That is, providing there are any aliens out there.

Although according to the scientists, there’s got be life elsewhere in the universe, as all the necessary ingredients are ubiquitously distributed.

It’s just a question of having exactly the right circumstances to initiate the process, such as are met in our solar system by the unique configuration, character and relationship between the sun, the earth, its strange and relatively large moon, and the presence and positioning of the huge gas giant Jupiter. But mainly because it’s in the goldilocks zone, an orbital area at the right distance from the sun to support liquid water, essential for the formation of life as we know it.

Although life as we know it also consists of the myriad forms of microorganisms, such as bacteria that seem able to thrive in virtually any conditions and sometimes lie dormant in huge blocks of ice for millennia, yet become active again when a rise in temperature melts the ice.

Life can also exist in a vacuum. In fact certain bacteria strains survive a journey all the way to Jupiter’s moon Europa and back, intact with the bacterial spores they left with. While we humans have to wrap up airtight and insulated within bulky environmental suits to survive even for just a minute in space, microorganisms flourish in it. But for us, space is an entirely alien and hostile medium.

In space, you’ve also got to get used to the sensation of being weightless and learn how to move about in weightless conditions on board a space capsule or station without injuring yourself.

Not to mention getting used to just how weird and disorientating it can feel, although some people enjoy themselves immensely in weightless conditions, whooping with delight while leaping, swirling and catapulting about like ultra-fit athletes or little kiddies at playtime. But not everybody warms to the sensation; those that can’t get used to it, may suffer from recurring maladies such as habitual space-sickness.

They say that everybody throws up the first time and whether that’s actually true or not I can’t tell you – I’ve not met anyone who hasn’t, so far. I suppose that’s how the vomit comet got its name.

You can prepare yourself in advance with anti-nausea tablets or jabs, but they may not always work, maybe for some psychosomatic reason. Who knows? I don’t. I reckon even a doctor doesn’t either.

Getting into and wearing your bulky spacesuit with all its pockets and attachments; its array of gadgets, tubes, wires, meters, nozzles, straps, buckles, press studs and zips is quite a complicated and time-consuming procedure as well. And it can really piss you off, unless you’re patient and meticulous. That’s another couple of habits you need to acquire when you’re in outer space.

Then there’s the business of feeling like you weigh a ton when you come back to Earth, with all your muscles aching and weakened from atrophy.

They send you to the medic for a series of physiotherapy and exercise sessions and put you on a special protein, vitamin and mineral diet for that.

There’s a real danger in developing such advanced muscular atrophy together with softening of the bones, combined with their detachment from the joints, that spending long periods in low or zero gravity is really not advisable.

In space also, you’ll be eating your food in a paste form from squeeze tubes and drinking bubbled liquid through a straw, that is till the boffins have figured out a viable method of centripetal generation for producing artificial gravity on board spacecraft.

But before all that, there’s a whole heap of rigorous physical fitness tests and technical exams and special training courses before you can ever get near a spacecraft, let alone lift-off in one.

And that is the toughest one of the lot, undergoing take-off from the Earth’s surface with all those g-forces pressing down on you.

Earth’s standard gravity is 1 g. Roller Coasters don’t expose you to more than 3 g. Without special training you can black out between 4 and 6 g.

A trained, fit person wearing a g suit and practising the straining manoeuvre, can, with difficulty, sustain up to 9 g without loss of consciousness.

But even for a minute, a constant 15 g-s can be deadly.

High-G training is done by aviators and astronauts wearing protective g suits on a centrifuge, an apparatus resembling a fairground roundabout.

The centrifuge revolves at increasing speeds to a level that would be considered out of control on a fairground roundabout. This is arranged in increments, giving the trainees a chance to acclimatise at each stage.

It won’t be till you’ve gone through all that, that you’ll be allowed your first take-off on a super-orbital spacecraft.

One little slip in space can be fatal, like opening an outer airlock door before you’ve put your breathing helmet on.

Step out of an opened outer airlock door into empty space without any protective gear and you’re in big trouble. After about a minute you’d start to swell up. You would also be in dreadful pain and eventually you would explode from lack of sufficient air-pressure, that is of course, unless you suffocated first from lack of oxygen.

So it’s vitally important to check everything out first.

Make sure that your equipment is functioning properly, and that every little item of information you receive on it is bona fide, that each single instruction is the real McCoy, and not just a lot of old bollocks.

If you’re worried about the information you’re receiving, suspend all operations, put yourself in dry dock and consult an engineer to get your equipment checked.

Only when the experts have gone over your craft with a fine toothcomb and issued you with a signed bill of inspection pass can you confidently resume operations.

If you go outside to effect repairs on the hull, make sure you’ve donned a pair of magnetic boots and that your suit belt is hooked up to a secured lifeline.

You don’t want to finish up floating away in an endless vacuum till your oxygen runs out. A marker buoy for all to see and point at and say: “Uh oh, man overboard. What a horrible way to go, poor soul!”

Yep – there’s a long way to go yet, before you can step out into space, lad!

The day will come, a long way off in the future, when travelling through space will be no less comfortable than taking a leisurely ocean cruise on a luxury liner or a tranquil transcontinental flight aboard a first-class passenger jet.

And all your needs will be taken care of by an efficient, well-trained, first-class staff of commercial space-liner employees. So you can sit back and relax, enjoying your journey without a care in the universe, and you won’t even have to raise a finger other than to beckon a member of staff.

But until then, we’re saddled with the hard fact that spaceflight is still in its infancy, with lots of hazards and difficulties to overcome before it’s a breeze.

In the meantime, you really need to bone up on every single little point regarding safety in spaceflight, before you even dream of stepping out into space. Out there, you’ve got to be absolutely professional and always keep your wits about you.

So at present, it’s one of those cases where you’ve really got to want to do it, more than anything else! Otherwise, forget it!