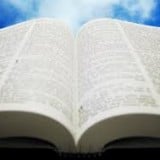 HE WAS LEAFING THROUGH THE BOWLY HIGHBAL.

“What’s this Genesis?” he demanded. “Wasn’t Phil Collins in that?”

Without waiting for a reply, Daftas continued impatiently. “And what the giddy aunts is Leviticus – some kind of huge creature?’

“No! That’s Leviathan! You’re getting your metaphors mixed.”

“Hmm. I thought I knew damn well what I met-her-for. She whore a real good woman, too. And I never mix one with the other – I keep them all separate.”

“Please! Refrain from ribaldry in the House of the Lord.” The minister’s jowly cheeks swelled and flushed and beneath his spectacles his eyes bulged, like some bullfrog’s.

“Alright! Keep your collar on, Vic. Only winding you up. But then, there’s a lot that doesn’t make sense in this here book. I mean – I couldn’t read it and take it seriously. I’d have to be off my rocker if I did. It’s like comic book fantasy, only even less plausible and a lot less fun. That’s why I have to send it up lightheartedly, to keep my spirits up in the face of it. Now there’s a metaphor for you – or is it a pun?”

“Neither! You really should get a grip on yourself, Mister Daft Arse! Show a little deference and humility in the House of the Lord.”

“Hey! Do you mind Vic! It’s Daff Taz, as in daffodil and Daz, the washing powder. You may be a shepherd, but I’m no sheep. I’m only reading this out of curiosity. Well, for research, really. So I know what those damn creationists are talking about when they spout their nonsense at me and so as I’ve got ready answers for them.”

Huge furry caterpillars reared up like terrified twins above the black rims surrounding a pair of beady little eyes.

“You’re not as daft as you make out, Vic. The Bowly can’t have affected you that completely, if you’re this sharp.”

“Oh, my humour. A spoonerism. The Bible!”

“But the Bible has indeed affected me, Mister Daff Taz – profoundly. That is precisely why I have become a minister.”

Daftas looked up at the great dark curves of wooden beams arching across the ceiling, catching a peripheral glimpse of rainbowed sunlight through the stained glass above. The phrases, ‘Louse of the Horde’ and ‘The Horde’s Louse’ flashed through his mind as he turned to face the priest.

“Each to his own, Father Kirkpew. One has to be true to one’s self, I suppose, whatever the real truth actually is.”

Can you believe it? His name translates as ‘Churchseat’, Daftas mused, whimsically transposing Father Kirkpew into ‘Kather Pirkfew’ and ‘Pather Firkkew’ automatically in his mind. He shook his head briefly to clear it of this word-juggling habit that followed him around perpetually.

“This above all: to thine own self, be true,” Kirkpew was droning in a sonorous baritone. ‘Lord Polonius to Laertes in Hamlet; Act I, Scene III.”

“You’ve certainly swallowed your Shakespeare, Vic. Half the expressions in today’s English seemed to be descended from that old bard.”

“And many from the bible, too,” Kirkpew added weightily.

“It is easier for a camel’s hump to pass through the eye of a thimble, than for a man to enter the kingdom of Devon – or something vaguely like that, I seem to remember from my schooldays.”

“Quite a twisted parody,” Kirkpew observed. “But actually worded as: It is easier for a camel to go through the eye of a needle than for a rich man to enter the Kingdom of God.”

“Now that – is one of the few more believable passages in the bible,” Daftas replied. “Admitting the extreme difficulty of ever attaining entrance to such a place as a spiritual heaven. It’s almost like saying: Well, does it really exist?”

“It’s more a question of what you need to be like if you wish to enter heaven,” countered the priest.

“I most certainly do. Which makes me wonder why in heaven’s name you’ve come anywhere near a church in the first place.”

“I told you, Vic. Research. Curiosity. I could get it in the library or online, I know. But I want the vicar’s angle, too. Helpful knowledge on just what it is exactly that I’m up against. Not that I want to be up against it, or even thinking about it. But it’s there regardless, breathing relentlessly down my neck and forcing itself upon me in a most aggressive manner, every time I publish a book or an article.”

“This church does not force itself upon citizens, aggressively or otherwise.”

“No, but Creationists and other similar organizations do, and all purporting to the same religion or some other extremist version of it.”

“They are not condoned by me. Their ways of conducting affairs are not the Lord’s ways.”

“At least we both agree to holding more civilized views than they,” Daftas sighed.

“Though I feel I’m going to become a whole lot less civilized if I don’t make a breakthrough soon and find some way to put a stop to these creationists bugging me once and for all!”

Kirkpew folded his arms beneath the long black sleeves of his cassock.

“I pray that you are not going to do anything foolish, Mister Daff Taz?”

‘I’m searching for the ammunition to settle the matter as peaceably as possible, Father Kirkpew. Know thy enemy. From The Art of War, by Sun Tzu, some Chinese General and Author around 500 BC. The full quote…”

“Know thyself, know thy enemy. I like to read, fairly extensively – mainly in the field of classical literature.”

“You know what I’m getting at, then!”

“I would suggest,” Kirkpew paused, “respectfully, that you do know thyself as well as thy enemy, before you go ahead with your plans, Mister Daff Taz.”

Daftas knitted his brows and narrowed his eyes questioningly.

Kirkpew shrugged, lifting both hands, palms outward in the process. The white cuffs matching his collar showed as the sleeves of his cassock slid back.

“I merely feel that you may find you’ve bitten off more than you can chew if you should engage in a confrontation with these creationists. It may be wiser to simply carry on as you were and ignore them completely.”

“Bit hard to do, sometimes, Vic. They’re a pretty persistent, menacing, self-righteous, know-all bunch of ignorant bastards! But I get your drift.”

“By all means carry on with your religious research. It can do no harm to gather knowledge and may reveal a solution you hadn’t previously thought of. But I would strongly recommend that you err on the side of caution before reacting to these external pressures.”

“Because I’m an atheist, for a start. I’m a Neo-Darwinian evolutionist, to boot and an author of many works in that field. All of which, are at odds with religion. I even send it up, make fun of it – and make no attempt to hide that fact from you, a minister of the established church.”

“I bear you no malice and I’m sure you bear me none, despite your ribald frivolities and irreverent behaviour, which I feel may be just a front. I believe you mean well in your way. Oddly enough, I even admire your spirit.”

“Really, Vic. I’ll take that in the spirit it was meant, but I’m grateful for your indulgence and thoughtful advice.”

“This King James has got a lot to answer for, making all of these ancient Hebrews sound like a bunch of Shakespearean characters!”