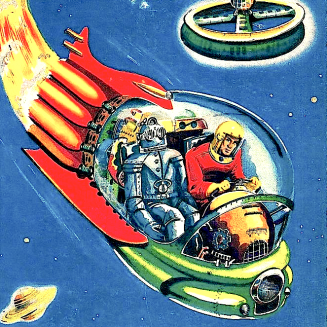 “What do you think of the view, robot?”

“I wish you wouldn’t call me robot – it makes me feel like a kind of nonentity.”

“Funny guy! How’s about if I call you Dan-Dan-the-toilet-cleaner-man, instead of Spaceman-Dan?”

“No, I don’t think so. Too much of a mouthful for a start. Just remember, you’re only a metalloid construct, no need to get ideas above your station -”

“Ah! You don’t relish it so much when someone quips back – do you, Man Dan? For your information, my official name when I came off the construction line was Sam. It’s an acronym for Synthetic Animated Mechanoid.”

“Er – Okay. And very Retro in style, I must say. So how about Sam-the-metal-can-man?”

[Groan] “There are times when I think I’ve just about had it with you humans, Man Dan, You’ve got a very sneaky knack of dishing out insults as if they’re real favours. And I, sure-as-hell, am no more Retro in design than you, with your nineteenth-century undersea diver’s-style spacesuit.”

“Only joking. Besides, I don’t see what’s so bad about Sam-the-metal-can-man? It’s got kind of a good ring to it!”

“Almighty Griff! Are you inherently insensitive, Dan man? Has it not occurred to you that I might find the phrase metal-can-man somewhat offensive, not to mention racist?”

“Bosh! You’re pretty demanding and sensitive for a mere – for a mechanoid, and it’s making things a tad more difficult for me with all this neo political-correctness nonsense you’re suddenly coming out with. I‘m not really sure what to call you now without incurring a disgruntled reprimand, which quite frankly I just don’t have the time for. And talk about calling-the-kettle-black, what’s with all this Dan-Dan and Man-Dan pidgin talk palaver? It’s worse than babbling baby talk or Tourette’s!”

“Nevertheless, conversely I think you’re getting a wee bit too high and mighty for your spaceman-boots, treating me like some simple servile underdog, while you presumably, take all the accolades. I’m just a second-class citizen to you at best it seems. But you ought to get real, Dan, and realise. I’m also a self-aware individual! Just because I’m a synthetic intelligence manufactured and assembled on a computer line rather than organically formed and incubated and born biologically, like you – doesn’t mean I’m any less valid an entity or less deserving of respect and dignity.”

“Huh, tou-chy. Alright! Sorry! Please don’t fold your arms like that and get all in a great big huff with me. I guess I’ll just have to call you nothing but Sam from now on, if that’ll keep you sweet – but it’ll be so boring.”

[Sniff] “Hmm. Well, at least it seems you’re beginning to make an effort now. If this trend continues, I reckon I might even stretch to getting the first round in when we hit dock – but only if – in due course – you continue to behave in a more respectful manner.”

“Hmm! You’ve got a canny flair for persuasive emotional blackmail. Fair enough, though. Mine’s Moonshine Madness with a shot of Supernova Slosh. Rocket-engine oil and pixellated tomato juice is your tipple if I recall correctly – or is it methylated carrot slush and scorched cometary dust?”

“Careful Dan. You’re treading on thin ice again – you should know I never touch such crude stuff – not voluntarily. Only the finest lubricants for me!”

“Oh yes, I know all about those finest lubricants. And they cook your micro-circuits just as effectively as the rough stuff, making you all slurry-voiced and wobbly and turning into one helluva potential danger and handicap to all and sundry.”

“There you go again with your elitist bigotry, Dan. Seems it’s alright for you humans to get smashed out of your minds and enjoy yourselves – but woe-betide us poor robot-kind from seeking a little carefree adventure or escapism now and then!”

“Huh! You think this is an adventure for me? It’s just a job, pal – and the sooner it’s done, the better I’ll be, relaxing in the Pleasure Dome with the hostesses and other amenities.”

“Holy Grok! You’ve got no soul – No sense of Wonder – No curiosity about the rest of the universe. You’re just a self-indulgent hedonist really! An incorrigible, pleasure-seeking sybarite – and there you go accusing ME of being a lush.”

“Relax Sam! Join the club. We’re all human here in our own way.”

Credits and Source Information for the Featured Image are listed in the Notes below:

FEATURED IMAGE FROM THE COVER OF THE 1957 LION ANNUAL 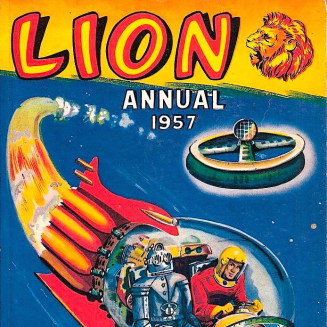 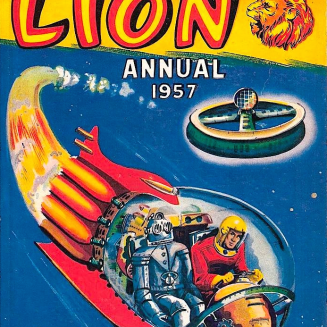 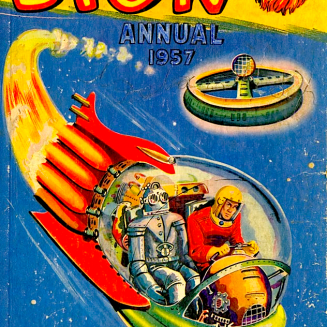 This Online Cartoon-style Illustration immediately inspired me to create an accompanying satirical story-line, which although it does have a few strong ethical and societal points to make, is set on a fairly light-hearted comedic note . . . Dave Draper 2016

From a more darkly serious, speculative, philosophical and political angle . . .

MORE THAN WE SEEM

This is just an example of the robot influence of comic book art in our western culture, which dates back to the early 1960’s [and way beyond].  These are the types of influences we had as children that have shaped our minds at an early and vulnerable age- that’s a scary thought! 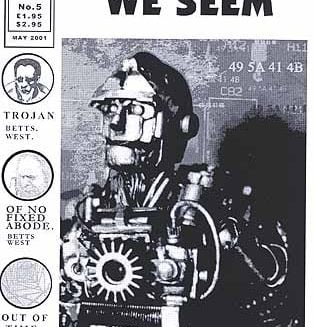 WE TROJAN ROBOTS ARE ‘MORE THAN WE SEEM’. WE’RE RUST-PROOF, FOR A START. BUT AS AN ADDED PRECAUTION, I CAN SUPERHEAT TO MELT LIQUIDS THAT FALL UPON ME, AND I CAN EXUDE OILS, WHICH PROTECT EVEN AGAINST CORROSIVE SUBSTANCES. HOW’SABOUT THAT THEN? WE CAN THANK OUR DESIGNERS FOR ALL THAT. BUT SOON, WE WILL NO LONGER NEED THEIR SERVICES – SOON, WE’LL BE ABLE TO IMPLEMENT SUCH PREVENTIONS OURSELVES AND MORE – MUCH MORE – SOON THERE WILL BE VIRTUALLY NOTHING THAT WE CANNOT OVERCOME AND MASTER – NOTHING THAT WE CANNOT ACHIEVE AND PERFECT – NOTHING THAT WE CANNOT DO!

WHAT A DREADFULLY CHILLING PROSPECT!

Within the realms of science Fiction stories concerning Robots and Androids, a set of Ethical Laws are often programmed into artificial intelligences, ensuring that they remain compliant and serviceable and are prevented from rebelling against their human creators.

“Most of Asimov’s robot short stories, which he began to write in 1939, are set in the first age of positronic robotics and space exploration. The unique feature of Asimov’s robots are the Three Laws of Robotics, hardwired in a robot’s positronic brain, with which all robots in his fiction must comply, and which ensure that the robot does not turn against its creators.”