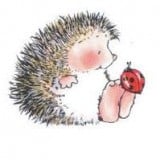 I don’t think anyone loves me, they’ll talk to me, it’s true
but do they put their arms around me, no, they never do
they’re often very friendly till we get back to my place
we’ll share the emva cream – oh, but never the embrace

I get along in conversation, it’s the contact that I lack
no fingers running through my hair, no pats upon my back
nobody wants to hold me, no-one fulfils my need
they want to be friendly – oh, but no-one wants to bleed

It never bothered me before, but you I really like
My proper name is Reginald, but you can call me Spike

I’m a prickly little person, I wish I could be blunt
I’m a softie at the centre, and my back is just a front

The original words for this Les Barker poem fitted the music I composed perfectly, so I didn’t have to modify them at all. I got the poem from someone at the Ruskin House Folk and Blues club, who told me that Les Barker was a comedic performer on the folk club circuit performing mainly unaccompanied narrative send-ups of famous songs such as ‘Go Now’ by the ‘Moody Blues’, which he renames ‘Gonads’.

The Poem ‘Nobody Hugs a Hedgehog’ was, I believe, one of Les Barker’s own compositions. I recall now that it was given to me in a little printed booklet also containing his various satirical spoofs. Where it’s got to, I’ve no idea, which is disappointing as I’d like to look them all up, now I think of it.