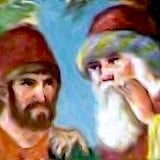 PETER SAID TO SIMON: “Who are you?”

Then Simon said to Peter: “Well, how about that? We’re both Jews!”

“Hmm, I guess so,” said Peter. He nodded thoughtfully. Then he turned to Simon and said: “So, let’s both go and get juiced!”

In the Joozbrooz Tavern they sat on wooden benches and knocked back a few tankards of unleavened ale before either of them spoke another word.

Then Simon belched prodigiously, wiped his lips with the sleeve of his robe and said: “Ah, that were right kosher!” He turned to face his newfound drinking companion. “So! We now know we’re not foreigners. But we ‘re still strangers to each other, for I’ve no idea what your name is, nor from which district you hail.”

“My name is Peter of Capernaum and I’m a fisherman.”

“Ah! Who isn’t? I’m Simon. I’m from around here and I’m a fisherman too, which isn’t unusual considering this is the Galilean seaboard and there’s little else work available aside from carpentry, boatbuilding and net making. And I’m no good at any of those.”

Peter stroked his beard reflectively. “What do you know of this Jesus fellow who’s recently arrived?” he asked.

“Which one?” said Simon, “there’re so many of them. I know at least six, it’s a very common name.”

“But this guy is a bit different from all the rest, he’s on some sort of evangelical tour and touting for recruits to join his band of merry men. I’ve met him and he seems like he’s on to something. I’m thinking of joining.”

“Sheesh! What’s the pay like? I could do with a bit of moonlighting.”

“Well, if you want to try something new, Simon – this is it! I’m getting a bit sick of fishing, anyway. It makes you stink after a while and not all the women like it. Besides, I’d like to widen my horizons. And this Jesus guy seems to attract people like flies. Women flock to hear him speak. I’d like a piece of that action.”

Simon lifted a brow at that. He watched curiously while Peter emptied a few shekels from his money pouch into his palm.

“I’m getting another tankard of Tiberian Best if you’ll join me, my treat. Then, if you like, I’ll take you down to the shore near Gennesaret. This Jesus guy hails from Nazareth but he hangs out hereabouts and he’s got some special sort of performance event lined up for tonight.”

Peter’s humble dwelling was near the shore-side of Ain et Tãbigha: a little whitewashed stone, boxy abode – just like all the others in the vicinity.

He unlocked the little hatch of his wooden mailbox and pulled out several papyrus scrolls, screwing up one of them and dropping three more to the floor in disgust.

“Ugh, bills, and a begging letter from Lepers Anonymous.”

But his face lit up as he opened the remaining scroll.

“Ah!” He glanced over at his newfound companion.

“Hey, this is really exciting, Simon.”

“What? What’s that, then?” Simon glanced quizzically at Peter.

“It’s the agenda for tonight, at Bethsaida – from this Jesus guy!”

“But just look at all the stuff that’s on it though!”

Simon squinted down at the scroll that Peter held open.

“It’s absolutely amazing,” said Peter excitedly. “According to what’s written here, he’s going to be walking on water, curing a congenital cripple, restoring the sight to a blind man and feeding five thousand people with five loaves and two fishes!’

“And he’s a fortune teller into the bargain!” Simon scoffed. “Do you really believe all that nonsense?” he said. “It’s obviously some con trick. He’s probably some kind of conjuror or commercial magician with a bag of cheap tricks up his sleeve and a small retinue of trusty assistants working behind the scenes or planted in the audience. Plus a considerable measure of intrinsic charisma and hypnotic talent to put it all across with.”

Peter tapped the side of his nose enigmatically.

“You can laugh, matey. But I can understand your reaction. That’s just what I might’ve thought before I’d seen this man in action. And I can tell you, it’s pretty convincing. How he does it, beats me, but it looks so real!”

I just don’t really think about it – because – I’m so drawn in by the experience. It’s just so incredibly exciting! So thrilling – just to be there! The atmosphere is just so completely – so utterly – electrifying!”

“But it’s just an escape, though, Peter! That’s what you’re looking for really, isn’t it – an escape route from the drudgery of your present, humdrum existence?”

Peter looked at Simon with a pained expression and tried to speak but his mouth just moved wordlessly.

“Don’t worry, man. I’m not trying to moralize or psychoanalyze you. That’s not my prerogative. I’m no different to you really, since I’m also looking for an escape route from my dreadfully mundane existence. No, I’m not knocking you – and I’m definitely interested in coming along for the ride.”

Simon paused at this juncture, then added: “If that’s still okay with you?”

“Course it is, you daft bugger! Doesn’t bother me if you’re a born sceptic.”

Well, thanks for that! But that’s just the way I intend to stay, a sceptic.”

“No sweat, man! There’s another sceptic among this Jesus guy’s retinue.

His name’s Thomas and he doubts just about everything. We call him Doubting Thomas.”

“Hmm! Well, that figures,” said Simon. But it’s no guarantee that I’ll get along with him just because he’s also a sceptic.”

“Birds of a feather,” said Peter with a mocking grin.

“That’s bollocks,” replied Simon. “Philosophers are birds of a feather, but they argue like mad among themselves. And that’s just one example of the ambiguity of that phrase.”

“Only jesting,” said Peter. “The man is nothing like you. He’s a bit of an awkward prick, actually and keeps pretty much to himself, though most of the others tend to shun him anyway. Even Jesus seems to avoid him.”

“Oh, great! That sounds like a flaming good reason for me to do the same. That’d be a fine start for me, being treated like some sort of leper. I surely don’t want to be associated with someone who’s just going to be the cause of my becoming a stigmatized social outcast.”

Simon grunted and then thought to himself, ‘But I’ll reserve final judgement on that until I’ve met everyone involved first.’

“Sorry, did you speak,” Peter asked.

“Just thinking,” said Simon. “I’m a coward and probably a hypocrite too.”

“I’m no saint myself,” said Peter.

Those of you who have read the gospels or otherwise have knowledge of them, will know that Peter was originally named Simon [Shimon, in Hebrew – Simeon, from Latin] and was not known as Peter until after he became one of the first disciples and later one of twelve apostles chosen by Jesus. He is generally referred to as Simon Peter to distinguish him from the other Simon, usually known as Simon Zelotes.

According to the gospel of Matthew [16:13-20] When Jesus asks. “Who do you say I am?” Simon [Peter] answers, “You are the Christ, the Son of the living God.” Jesus then addresses Simon by the nickname Peter [Cephas, ‘stone’ in Aramaic – Petros, ‘stone’ in Greek] and says, “On this rock [Petra, in Greek] I will build my church.”

Simon Peter was a Galilean fisherman, the brother of Andrew who was also one of the 12 apostles. Both brothers came from the village of Bethsaida [John 1:43, 12:21]. Peter married and lived in Capernaum. He was also a follower of John the Baptist. Being human with human failings, Peter would have been considered a sinful man. In fact he considered himself so, and was ashamed of this sinfulness in the presence of Jesus [Luke 5:6-8].

The Saint Peter we hear of today, was not canonized but proclaimed a saint by early Christians around 69 AD, because of his martyrdom. He was reportedly crucified upside down in Rome by Nero. The canonization did not occur until the 12th century AD.

Much less is known of Simon Zelotes [Simon the Zealot]. He is a bit of a mystery character in the Bible, insomuch as there are very few mentions of him.

In various other versions he is known as Simon the Zealot. Whether it was because he was supposed to be a member of the radical Zealot Party or joined later, or because he had great fervour in his religious belief is not made clear.

Simon was also one of the 12 apostles. The About.com Christianity website says that, ‘Jesus may have chosen Simon, a member of the tax-hating, Roman-hating Zealots to counterbalance Matthew, a former tax collector’.

“But this sounds all too much like a manipulative game of political intrigue played by Jesus with his followers to be entirely plausible. Surely a man such as Jesus is portrayed, should not behave in such an uncharacteristic fashion.”

According to the ‘Simon the Zealot’ entry from ‘Wikipedia’, the Canaanite title comes from Matthew 10:4 and Mark 3:18, where Simon is called Kananaios or Kananites. The entry also states that both titles derive from the Hebrew word ‘qana’ meaning ‘The Zealous’ and was mistakenly thought to signify the town of Cana or even the region of Canaan.

It is concluded: ‘that the term Zealot is a mistranslation and in the context of the Gospels means ‘zealous’ or ‘jealous’, as the Zealot movement did not exist until 30 or 40 years after the events of the Gospels’.

Compiled and edited from various Online sources by Dave Draper 2013