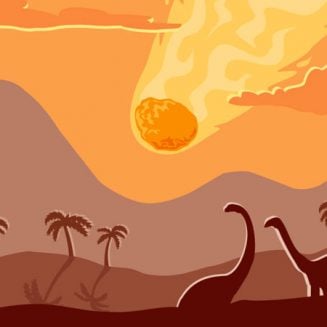 “Trust our bloody luck, Bron!” [Plod stamps elephantine foot, raising little dust-clouds full of swirling flies from the sunbaked soil] “I blame those old bar-stewards, the Laws of Chaos and Entropy for this! They’re always getting in the way of Progress and generally buggering things up for us. No wonder so many of this world’s creatures end up becoming extinct.”

“Aye! [Bron raises serpentine neck in an s-shape while munching foliage from a treetop and eyeing the approaching asteroid nervously] An’ if it’s not flamin’ comet or asteroid smashing us into oblivion for several million years, it’s ruddy great chain of earthquakes or eruptin’ volcanoes splitting continents apart and shifting ‘em hither an’ thither – or bloody great floods, an’ ragin’ forest fires – not to mention set of friggin’ ice ages freezin’ th’ bollocks off us all. Yer’ joost can’t win, can you, Plod?”

“I’ll bet God’s pissed off, too Bron – these disasters slow down the process of creation quite considerably. Seven days? No chance, Goddy-balls!”

“God? What God, Plod? There is no God! If there were, he’d have t’ be pretty flamin’ useless, letting things go on as they do – allowing such injustices and atrocities as there are to be committed, and all the natural disasters that occur. Unless of course, he were bloody malevolent sadist, toying wi’ everything for devilment like hateful little sprite. Besides, I thought yer didn’t believe in the existence of a god – that everything were formed according to natural laws o’ physics and chemistry, without need t’ be invoking divine guidance. Never ‘ad you down for superstitious tosser!”

“Ee – take it easy, Bron lad – I were only speaking metaphorically like. ‘Avin’ bit o’ fun. Don’t take me quips so seriously. Oops!”

A Gigantic Great Deafening Explosion Ensues – It is followed by a Complete Blackout as the asteroid makes shuddering contact with the Earth – obliterating everything for centuries to come.

Just a few remnants of resilient and tenacious plant and animal life remain and a virtually indestructible stealth of varied microorganisms, tucked away in obscure subterranean passages and deep sea canyons and crevices.

That wasn’t the first major asteroid strike on the Earth, either!

Scientists reveal that there are vast numbers of asteroids on the move in the solar system. Many of them pass the orbit of Mars on their way inwards in their elliptical course around the Sun – and are known as Near Earth Objects.

Aside from all the meteors that burn out in the upper atmosphere, often falling as little meteorites afterwards, scientists also predict that roughly once every 100,000 years, one of these large objects will collide with the Earth causing global disaster, so they are busy cataloguing their courses and trying to devise deflective schemes to nudge them towards the Sun or away into deep space.

Let’s hope the Earth stays free of cosmic impact long enough for humans to develop the technology to terraform other planets in our Solar System that are suitable for habitation . . .

. . . long enough for humans to develop viable methods of ultra-fast travel over the vast distances of interstellar space, in search of new worlds to live on in other star systems . . .

. . . before humans, like the dinosaurs, are also extinguished forever on their world of origin!

The Featured Image is from: jeremkin/Getty Images

The Article it concerns is titled:
What Doomed the Dinosaurs Also Shaped Earth’s Plant Life
By Charles Q. Choi, Sep 16, 2014

The full content, which I have edited, is entered below:

The catastrophe that ended the reign of dinosaurs may have also helped forests bloom with flowers that could better withstand the post-apocalyptic climate.

The prime suspect for killing the dinosaurs was a cosmic impact — the Earth was struck by a rock from space about 6 miles wide roughly 65 million years ago, near what today is the site of the small town of Chicxulub (CHEEK-sheh-loob), Mexico. This disaster would have released as much energy as 100 trillion tons of TNT, or more than a billion times the combined energy of the bombs that leveled Hiroshima and Nagasaki, leaving behind a giant crater more than 110 miles across. The giant tsunami, global wildfires, and dramatic cooling that happened after the asteroid or comet hit, killed the dinosaurs (save for the ancestors of today’s birds), paving the way for the rise of mammals.

The scientists analyzed 1,150 fossilized leaves of angiosperms (the flowering plants, excluding conifers) embedded in rock layers known as the Hell Creek Formation, found in North Dakota. The investigators used those fossils to reconstruct the ecology of a diverse plant community that lived during a 2.2 million-year period spanning the cataclysm, which researchers believe wiped out more than half of all plant species.

The team found that faster-growing deciduous plants replaced their slower-growing evergreen cousins to a large extent. Why? They suggest the cosmic impact led to a chaotically variable climate that favoured plants that grew quickly and could take advantage of shifting conditions. This could help to explain why modern forests are generally deciduous and not evergreen.

The K–T of K-T Event is an acronym for the Cretaceous–Tertiary [Extinction], which occurred approximately 65 million years ago at the close of the Mesozoic Era and the opening of the Cenozoic Era, when the [already declining] Dinosaurs finally became extinct, leaving a space for the tiny, shrew-like Mammals to evolve and spread.

The word Cretaceous means chalk-forming – and is derived from the Latin “creta” [chalk] usually abbreviated to K for its German translation “Kriede” [chalk], hence the technical term K-T [Cretaceous-Tertiary].

The Cretaceous geological period takes its name from the various calcareous marine nanoplankton found in the fossil record – following the Triassic and Jurassic, the Cretaceous is the last of 3 periods in the Mesozoic Era, spanning around 79 million years between 145 to 65 million years ago.

Tertiary is the former term for the geological period from 66 million to 2.58 million years ago.

Now known as the Paleogene and Neogene Periods it extends to the first stage of the Pleistocene Epoch – which is why the K-T Event is also referred to as the Cretaceous–Paleogene extinction event, or the K–Pg boundary.

It is a time when many groups of animals, including non-avian dinosaurs, pterosaurs and large marine reptiles, died out – and when new groups of mammals and birds, as well as flowering plants [angiosperms], appeared.

The first epoch of the Quaternary period, between the Pliocene and Holocene epochs.

The Pleistocene epoch lasted from 1,640,000 to about 10,000 years ago. It was marked by great fluctuations in temperature that caused the ice ages, with glacial periods followed by warmer interglacial periods. Several forms of fossil human leading up to modern humans appeared during this epoch. [Abridged from MacBook Dictionary]

The Holocene epoch has lasted from about 10,000 years ago to the present. It covers the period since the ice retreated after the last glaciation and is sometimes regarded as just another interglacial period. [Abridged from MacBook Dictionary]