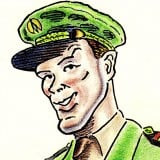 There’s a man Dan Dare
by Dynasaw Bay.
He’s a Pilot of the Future
and he’s come all this way
from Mars or Venus
to see the display.
“By jove!” he exclaims,
“this is all quite flawless,
but I do believe that
that bronto saurus!”
“Don’t worry mate,
he won’t do ya no harm
and the reason is,
coz he’s quite clawless!”
“Top hole,” said Dan
as he stepped on an egg.
Then the shit hit the fan
as it’s mum bit his leg.

The figure in the military-styled green-barathea uniform and peaked-cap [casting a surrealistic shadow pattern across his forehead] and representing the ‘Featured Image’ in this Poem Entry, is No. 14 [Colonel Dare Portrait, Pen & Ink & Colour Pencil 1996] in the ‘slideshow’ of the ‘Dan Dare’ Entry located in ‘Art’ under ‘Portrait’ ‘Space Art’ and ‘Fantasy’ [whose featured Image is my personal rendition of Frank Bellamy’s version of Dan Dare, attired complete with spacesuit, breathing helmet and bearing a standard-issue Spacefleet pistol].