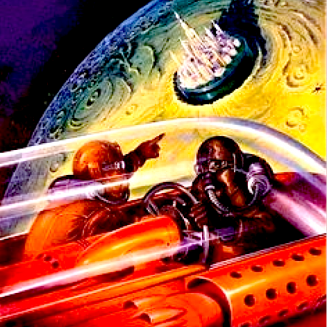 This particular Cepheid cluster is located in the Barnax region of the Sagittarius Arm, and boasts one truly vast orbital asteroid cloud.

Hmm. That’s very deceptive. VERY deceptive indeed! Now we’re closer, you can see that these rocks are much further apart than they looked at a distance. As far as the Moon is from Earth, on average. And they’re all different sizes and shapes, as well.

They’re typical asteroids. They don’t come off an assembly-line, you know. They’re bits and pieces from aggregations of dust particles and leftover chunks from the random collisions of larger rocky bodies. They range in size from several hundred to a few miles in width – right down to an assortment of boulders, pebbles, and grains. As a professional space pilot, I’m surprised you haven’t encountered asteroid clouds before.

I’ve seen plenty, but this is the first time I’ve had cause to enter one!

Now – we’re approaching at a tangential vector in euclidean space. But don’t let that worry you Snork, coz I know you’re all boned-up on such matters –

Yeah, sure. Two planes intersecting each other at acute angles. It involves the relationship between planes, angles and directions, and for our purpose just means we’re coming in at an angle to a particular object – and I’ll do any manoeuvring required from your navigational readings.

Well it’s not that one, but that’s what it looks like. And from this angle, when we get to it we’ve got to go into orbit round it, coz what we’re looking for will be on the far side.

Some sort of establishment – I was told. It’s called Crater City.

Right Norri, where are we now in this asteroidal domain?

We’re nearly there. Roughly a third of an Astronomical Unit, about thirty-one million miles or so. That’s another ten minutes at hyper-speed. Step on the juice, Snork!

Norris points downwards towards the white spires, turrets and towers looming up over the lips of a huge crater, but Snorki in his pilot seat is facing out towards starry space in a high orbit above the asteroid.

Hang on, Norri. I’ve got to make a u-turn, so that I’ll be facing the right way round to see.

Piloting the little cruiser further outwards from the asteroid in a great curving loop, Snorki speeds back to a lower orbit gaining a magnificent view of Crater City in all its pristine glory, with luminous starlight from the local Cepheids glistening from its ivory towers in splendid, sparkling iridescence.

It’s more like some fairytale palace than any city.

But why is it so naked and unprotected? There can’t be any atmosphere on this lump of rock – or much gravity either. Unless there’s a forcefield surrounding a breathable atmosphere, and centripetal generators embedded beneath the structure.

See that low shiny black wall around the buildings? It’s part of an encompassing elevator system that lowers and lifts the entire city – and yes, there is a containment forcefield and a gravity generator serving the installation.

At least, that’s what WE call it.

I can’t remember what it’s ACTUALLY called because it’s in some language that sounds really weird. And I don’t think I could pronounce it if I tried. At least, I’d have to see it written down in standard galactic. But even then it sounds like it would be an almost unmanageable task for human vocal equipment.

Are you sure? Some settlers amongst our own kinfolk, have evolved some quite unique new cultures in the three and a half centuries that humans have been in interstellar space. Maybe it’s just an evolved form of some ancient earthly language, like Mandarin, Austronesian, or Chukchi.

I don’t think it’s from any human language at all, Snork. In fact all the indications point towards an alien culture. A particularly advanced and fortunately for us, so I have discovered despite other reports to the contrary; a very benevolent and peaceable culture.

My job apparently, is to report back on its exact location.

It is said that the IE plan to send a star-cruiser to release some highly reactive chemicals or incendiary devices into the vacuum all around the establishment.

Er – I’m not sure, Snork. I think they might just be the middlemen, representing who-knows-what.

Aren’t they flogging a dead horse though, Norri – attacking an establishment armed with a forcefield?

I wouldn’t bank on it, Snork – even the protective-class force-fields can allow stray particles that have been technically enabled beforehand to seep in by osmosis, especially should the odd weak-spot occur.

But why? And surely the IE wouldn’t risk such a deliberately hostile attack openly!

Norris put a hand to his goggled brow, shaking his head slowly sideways and groaning. The loosened earpieces of his leather headgear flapped like spaniel’s ears

Oh, it’s all a lot more devious – I’m under the impression that some unnamed terrorist movement is going to be credited with the deed. The IE and Crater City are separate parts of some bewilderingly vast and convoluted interstellar federation, purported to be integrated harmoniously. But the truth is far from that. Underneath this political facade, they’re all bitter rivals, locked in a furious battle that is continually played out in an underhanded game of espionage and double-dealing.

Ugh! I thought I could smell a rat, Norri. A great big greedy corporate one – working for some dubious breakaway faction probably – or even – rival aliens.

I was wondering about this commission –

I didn’t sign up for this, Norri. I’m a free-lance commercial pilot and feel absolutely no allegiance to the IE – certainly not for any of their spying missions. They’ve never done me any favours. In fact if anything they’ve made things more difficult for small enterprises like mine to establish themselves. I can drop you off at a Space Station on the Cepheid fringes – I don’t want to maroon you, but –

It’s okay, Snork. I’ve had doubts about this all along. I may be a freelance navigator, but I’m not a mercenary and I’m not without principles – and now that I’ve witnessed your reaction, after finally learning, piece by piece, all the relevant details concerning this affair – I’ve decided not to send this report in.

And I’m beginning to realise that I was probably commissioned because my report could lend valid credibility to their questionable ventures.

As far as I’m concerned, Crater City does not exist. And as far as the IE are concerned – Though I tried and tried, I think they must have been taking me for a ride – coz I, sure as hell could NOT locate it.

Snorkelmas’s face lit up, though this wasn’t visible beneath the frogman-style mask and goggles that some veteran space pilots wore against long-term exposure to harmful cosmic radiation.

Music to my ears, Norri. If you’re interested, I know a great place on the far side of the local Cepheids called Paradise Hotel. It’s got everything you could possibly want when you’re alone in deep space – just dying to get your space-clobber off and your best duds on – and grab some welcome rest and recreation. 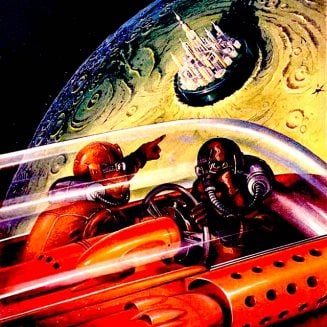 This is the amazing Retro-Style Illustration that inspired me to write my ‘Crater City’ Science Fiction story and also became the dynamic Featured Image presenting it.

To go with the spoofy names I’ve dreamt up for the characters in the story, I’ve invented family histories establishing [Space Pilot] Snorki Snorkelmas as a mock-ancestral Icelandic name derived from Norwegian, although genetically he has roots in both Norwegian and Gaelic ancestry.

Inspiration for the name Snorkelmas was influenced by the bizarre retro appearance of the space pilot in the featured illustration – in particular by the goggled mask and snorkel-like bendy breathing tube, so humorously yet also spookily reminiscent of the old WW2 gas masks.

[Navigator] Norris Numnutz is a mock-ancestral Eastern Slavic name [such as Russian and Ukrainian], with a forename more prominent globally in the US and UK. The derogative sounding Numnutz [when spoken in english] was probably pronounced something like Noom-noosch in the native vernacular.

Although ethnically European in origin, Norris’ and Snorki’s family branches became naturalised American citizens for almost a thousand years before emigrating to the Cepheids of Sagittarius Barnax in the early thirtieth century AD.