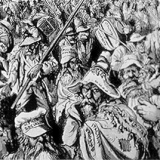 Oh, you can’t walk down the High Street and feel safe there today
There’s too many foreigners, all getting in the way

When the Celts all painted their faces blue and the Druids made sacrifice
Till the Angles, Saxons and Vikings came and turned their blood to ice

Then the Normans came and sacked the lot and raised castles – oh, so grand
And their barons collected taxes – all up and down the land

Yes, everyone is British here – British to the core
Right back to the Ice Age when – we all lived elsewhere before