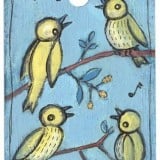 Now it’s New Year and it’s Auld Lang Syne
It’s twelve o’clock – am I feeling fine
Should Auld Acquaintance be Forgot?
I don’t know – but it hurts a lot

The lyrics of this song were adapted from a poem called ‘Adrian Henri’s Talking After Christmas Blues’ by Liverpool Poet Adrian Henri, to fit a chord progression that I composed for it.

The original poem was printed in a paperback titled ‘Penguin Modern Poets’, first published by Penguin in 1967. I put the song together in 1979 from the 1979 reprint.

Without changing the message, I have modified the original poem quite extensively, cutting out little chunks that were too stodgy and rewording the odd snatches that didn’t gel comfortably in my opinion within the type of song format I foresaw.

I have included the complete Adrian Henri Poem beneath for comparison with my musical reworking. I have performed this song many times at various acoustic venues, as both a solo rendition and with Tony Crawford on mandolin.

Well I woke up this mornin’ it was Christmas day
And the birds were singing the night away
I saw my stocking lying on the chair
Looked right to the bottom but you weren’t there
there was
..apples
….oranges
……chocolates
…….aftershave

So I went downstairs and the dinner was fine
There was pudding and turkey and lots of wine
And I pulled those crackers with a laughing face
Till I saw there was no one in your place
there was
..mincepies
….brandy
……nuts and raisins
…….mashed potato
– but no you

Now it’s New Year and it’s Auld Lang Syne
It’s 12 o’clock and I’m feeling fine
Should auld acquaintance be forgot
I don’t know girl, but it hurts a lot
there was
..whisky
….vodka
……dry Martini (stirred
…….but not shaken)
…. and 12 New Year resolutions
– all of them about you

So it’s all the best for the year ahead
As I stagger upstairs and into bed
Then I looked at the pillow by my side
I tell you baby I almost cried
there’ll be
..Autumn
….Summer
……Spring
…….and Winter
– all of them without you.