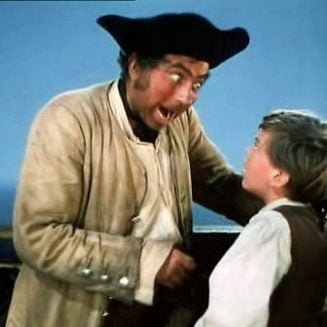 “You talk such a load of capricious crap, Lung Jun. I know damn well who and what you are,” young Orkins replied. Instantly deciding he no longer wanted the post and looking for a quick way out and seizing the opportunity by being as disrespectful as possible, he continued hastily.

“To be perfectly honest and with all due respect, you sound like some friggin’ old senile village idiot with a really bad speech defect and you possess the most dreadfully uncouth rustic accent and gravelly growling voice I’ve ever heard. That of an asthmatic West Country bumpkin’s!”

Smiling inwardly at the effect his words were having upon the old sea-dog, Orkins kept his verbal volley flowing relentlessly, while a kaleidoscopic sequence of grotesque, bulging-eyed grimaces rippled in the most prizewinning gurner’s fashion across Saliva’s features.

“I see that you’re gravely disadvantaged physically,” Orkins said, enjoying himself immensely. “You hop along like a frantic frog amputee, swinging along from your stumpy old peg leg to your gnarled and knobbly wooden crutch. One shoulder is raised much higher than the other, while the other seems to be heavily weighted down with an enormous great cross-eyed demented parrot, either squawking ‘Pieces of Eight’, and ‘Fifteen Men on a Dead Man’s Chest’, or Yo Ho Ho and a Bottle of Rum! What a hack!”

He leered lecherously at Orkins, who backed away with a startled expression on his face.

“Oy reckon as ye’ll be makin’ a moyty foine liddel catamite an’ orl, me ‘earty, when oyv locked me parrot in iz cage – an oy gets ye alone in moy cabin wi’ ye trousers down. Eh? Harrr!”

Saliva lunged forward at Orkins, who stepped smartly out of the way.

“Boy eck, ye as got a purty liddel marf, so ye ‘ave,” Saliva muttered breathily. “Oy bet as ye could do a good bit a prayin wi’ that an’ orl! Arr now, ‘ow would ye loike ta do a noice bit of’ earnest prayin’ with the most upright member o’ moy congregation, lud?”

“No fear,” yelled Orkins as he ran up on deck and grabbed a lit torch from its bracket along the way.

“Shiver me timbers! Stop the liddel varmint. Men! Where are yer? Ye lily-liver’d deck-swabbing landlubbers! Arrghh! Oyl flog the flamin’ lot a yer’ wi’ the cat ‘o nine tails, then rub salt in the wounds an’ make ye all walk the plank! Oil send tha lot a’ yer down to Davy Jones’ locker, so oy will. Come back ‘ere Orkins! Orrr-kins!”

Orkins stood up in one of the boats and screamed out so loudly that the seagulls above screeched back in refrain.

He jerked his fingers up in an abusive sign.

Poking his tongue out, Orkins grabbed the handle of the davit and began lowering the lifeboat over the side, swiftly torching the remaining boats with a wild flourish before disappearing from sight. The dry ancient timbers flared up furiously into roaring orange and yellow-flamed life, belching thick black smoke. Alarmed sailors ran hurriedly for the water buckets to quell the flames before they started spreading onto the rest of the ship.

“I’ll scupper your game, Saliva,” Orkins called out shrilly through the resulting clamour and confusion, his voice echoing out across the waves like a warning siren. “And I’ll report you to the Admiralty! I’ll tell them where you’re headed when I get ashore. And reveal the whereabouts of all your planned raids, you dodgy old pirate!”

He paused, cupped his lips with both hands and took a long deep breath.